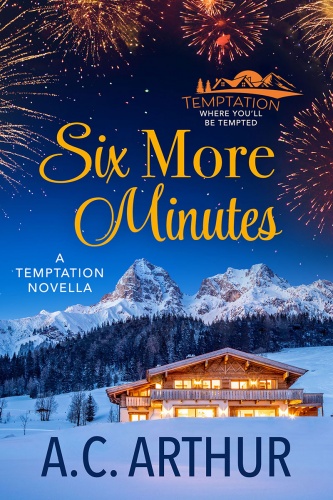 Book 4 in the Temptation Series

This thing had been going on for a year now. The thing where they’d meet up at this quaint little bed and breakfast to spend a steamy weekend together. It had started last Christmas when they’d both been in Temptation. They’d agreed to the no strings attached occasional trysts, but this holiday season—after all she’d gone through in the past months—Gemma Taylor might need something else; and if Myles Donovan doesn’t agree, she’ll take just six more minutes in his arms.

In addition to being part of the Temptation series, this novella is part of the New Year Bae-Solutions Series. It is 1 of 8 short stories that are connected by the New Year’s Eve theme. Here is a list of all the books in this series:

One More Drink by Elle Wright

Each story can be read as a standalone.

Book 4 in the Temptation Series 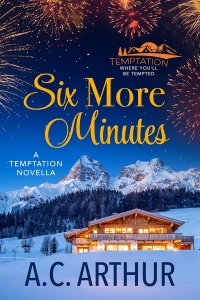 Gemma fell back against the pillows breathing heavily and feeling more sated than she had in a long time. As a matter of fact, she hadn’t felt this way since the last time she’d been with Myles—two months ago. “That was the best quickie I’ve ever had.”

And quick it was, she’d arrived at the cabin on the outskirts of Temptation, Virginia, about fifteen minutes ago. No sooner than she’d walked through the door and general pleasantries were exchanged then she’d been in Myles’ arms. Her clothes were taken off and his followed. He’d retrieved a condom that she put on him in record time. Before she could even get all the way on the bed, he’d lifted one of her legs and wrapped it around his waist before thrusting deep inside her. A handful of moans and groans, some deep ass penetration and an orgasm that truly almost blinded her later and now she was struggling to catch her breath.

“Quickie?” he questioned after rolling over onto his back a few inches away from her.

At the slightly hurt, but still light sound of his voice she reached out a hand without looking and patted his arm. “Okay, three exhilarating and fulfilling minutes.”

She turned her head only because the rest of her body was still in that orgasmic coma. His brow was furrowed, brown eyes searching her imploringly. “Four and a half?”

She frowned and rethought a moment. “Okay, whatever, six.”

He did a fist pump into the air and she bit back a smile.

It didn’t matter how long or how good the sex had been, it couldn’t happen again. Not like this. Not in secret or in hiding, as if a few days in an impeccably maintained rustic cabin were the updated version of a booty call.

“I’ll be right back.” He touched his full lips to her cheek, leaving a loud kiss before he rolled out of the bed.

Gemma watched him walk into the bathroom. The dimpled cheeks of his tight ass, muscled thighs and all that gorgeous deep tree bark brown skin made her mouth water each and every damn time she hooked up with him.

This was the fourth time they’d been together since she’d met Myles right here in Temptation last year at Christmastime. She’d been born in this town but last year was only here for a visit with family when she’d ended up helping a singer who’d been filming a video here and needed a hair stylist. In a town the size of Temptation there weren’t many of those around and Ms. Gilda who’d been doing hair for the last thirty-five years was on the brink of retirement. Besides that, news traveled through the small town like wildfire, especially when another one of the infamous Taylor Sextuplets had come home.

Well, she’d only stayed through the holidays last year. And in the past twelve months she’d come back for her brother Gage’s wedding, her other brother Gray’s birthday celebration for his older twins Jack and Lily and then again, this past week for Christmas. But in between that time she’d met up with Myles at National Harbor in April, at Virginia Beach in June, and at a quaint little bed and breakfast in October. She hadn’t expected his text on Christmas Eve telling her he was also in Temptation taking care of some final issues with the new golf and tennis resort he’d built. Her original plan for this trip had been to stay with her family until the 28th and then return to her salon in D.C. to begin scheduling appointments for all those wanting to look good for the New Year’s celebrations. But that plan had changed and instead of heading home on the 28th, she’d come here to this beautiful cabin to feel Myles buried deep inside her one more time.

With a heavy sigh she yanked the sheet over her naked body. With Myles gone it was suddenly chilly in this massive bedroom. To be honest, from what she’d seen of the cabin he’d invited her to in the short time she’d been here, most of the rooms were huge and impeccably decorated. The bed she was laying in had to be a California King with gorgeous dark wood posts. There were lots of pillows—which she personally loved—and a thick cream-colored duvet over the softest sheets. And why was she laying here thinking about this big ass bed, the rich textured wood beams on the vaulted ceilings, the wrought-iron chandelier, and the dove gray rug on the floor? When she should’ve been recalling the way Myles had just given her an almost debilitating orgasm. Damn, her thighs were still trembling, her pussy still throbbing long after his thick length had slid out of her.

She closed her eyes to that thought because it troubled more than pleased her and for that she felt she needed to pray for some sense to be smacked into her.

“Do you want breakfast, or did I actually manage to put you to sleep?”

His tone was joking as she cracked her eyes open and turned to see him standing on the side of the bed closest to her.

He grinned, that slow and sexy ass grin that wrapped around her like a warm blanket every time she saw it. “Ok. So, are you hungry? You wanna head to the kitchen to get something to eat?”

He was still naked as sin, yes sin, because that’s what it should be for a man to be this fine. How many times over the last year had she thought Myles Donovan was too good to be true? One million and one, including just now. With that train of thought her gaze slid from his gorgeous and slightly cocky grin, down over his perfectly sculpted chest, further down to the heavy length of his semi-erect dick. Did he just ask her something about being hungry?

“Yeah.” She cleared her throat and sat up in the bed, not paying any attention to the fact that the action had the sheet slipping down to her waist. “I can eat.”

Now it was Myles’ turn to shift his gaze. His tongue gliding slowly over his lips as he stared down at her full F cup-sized breasts. “So can I,” he murmured before shaking his head. “But we should get some food into our system first because I’ve got a feeling we’re going to be burning a lot of energy in the next few days.”

He reached for her hands then and she willingly placed hers in his, allowing him to help her out of the bed. When they were standing front to front, she tilted her head back slightly to look at him. Myles was six feet two inches tall to her five feet ten inches, so she didn’t have to crane her head back too far before she was staring into his deep brown eyes. He laced his arms around her full waist, pulling her closer to him before leaning in for a slow press of his lips to hers. No tongue, no heavy breathing, just that sweet, prolonged connection that almost had her changing her mind about what she’d decided to do during this present rendezvous.

“We should get some clothes on first.”

He made a groaning sound and scrunched his face in disapproval. “I like you naked.”

At thirty-three years old Gemma discovered she wasn’t too old to blush. “I like you naked too but cooking in the buff might be a little dangerous. Especially since I’ve got a taste for waffles, bacon and cheesy eggs.”

“Hmmmm. It’s lunch time, but I love your waffles.” His grin expanded to a quick chuckle and his hands slid from her waist to cup her ass. “So, we can get dressed for a little bit, but then the clothes are coming off. I’ve been waiting months to get my hands on you again, I’m not about to be feeling you through layers of clothes.”

The deep smooth timbre of his voice, that sexy as hell grin, those intense bedroom eyes, and the feel of his strong hands on her melted away all the shields she’d erected around herself on the drive out here. The resolve she’d decided she needed to have, the strength she’d channeled from her sweet, blessed mother, all that wavered as she basked in the perfection of this moment.

“You can feel me however you want, Myles.” She meant those words even if she had no idea how long this bliss would last, not after she said what she’d come here to say. 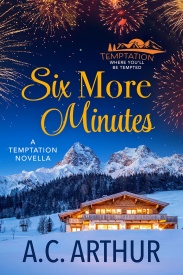