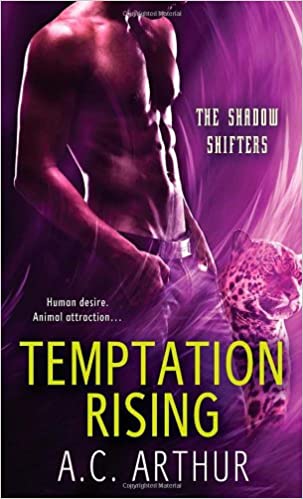 Book 1 in the Shadow Shifters Series

He’s one of the most powerfully sexy men she has ever met. He’s a jaguar out to claim and protect his mate.

Washington D.C. police officer Kalina Harper still dreams about that night, two years ago, when a huge jaguar saved her from a crazed attacker. Although she kept the truth to herself, Kalina can never forget the ferocious strength of the beast’s fangs and claws–or the raw animal hunger in its eyes. Until she meets Roman Reynolds…

Muscular, magnetic, and all man, Roman is a high-powered attorney with a predatory smile and seductive charm. He is also a criminal suspect with suspicious connections to the Amazon jungle. But when Kalina discovers that Roman is linked to a secret race of shapeshifting jaguars–who hunt down maneaters–she is forced to put her trust in a man who unleashes her wildest fantasies and fears. A fierce creature of the night whose nature is to protect his female at any cost…

Book 1 in the Shadow Shifters Series 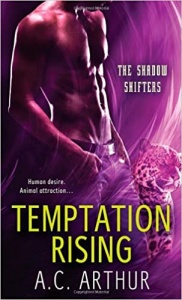 He could smell her.

The scent was alluring, seductive and mixed with something else. Fear.

It was the fear that pushed him forward. The knowledge that something was wrong. Quiet steps led him into the towering darkness between two buildings. The air was damp and thick from a day full of summer thunderstorms. The ground was slick with wetness, riddled with small puddles as he moved through the eerie blackness.

She tried to scream.

The sound was muffled but he heard it. His entire body tensed, every muscle, every ligament, just stood perfectly still while the sound registered. A woman’s scream. Rage boiled inside, rippling along his veins in heavy waves. Inside his cat roared pushing to the surface with ferocity that was almost unrecognizable.

He wasn’t in the jungle where he could run free, hunt and be hunted. He wasn’t beneath the deep green canopy of the rainforest with dense foliage and prickling sheets of cool rain pelting his body. No, he was on the streets of Washington, D.C., in the city he’d called home all of his adult life. The home of his human half.

This need to fight, to let the cat burst free wasn’t foreign but it was strange for here and now. Yet as he pressed forward the cat stretched, muscles bunching, eyes focused, the fight inevitable.

Continuing forward it was taking all his strength to hold the animal inside, at least for now. A warm breeze filtered past, massaging his face, bringing her scent closer. His nostrils flared as by his side fingers wiggled, tingled, burned with claws close to the surface.

His vision was acute. Even in the darkness the shadows ahead took form, a man, large, angry, intent. The woman—the one with the scent that reminded him of some other time, some other place—lay on the wet ground with him hunched over her. The strange man was between her legs, her skirt pushed up, stockings and underwear ripped off so that she was bared for all to see. He held her hands atop her head, handcuffing both wrists with one powerful hand while his other violated her body. Each time he touched her she squirmed, tried to break free and scream but something was stuffed into her mouth muting the sound.

The cat clawed at the surface, scratching at the barrier he’d created to keep it back. It was against their laws, against everything they believed. He could not reveal himself to a human, it would surely begin the extermination of his kind. And yet, he could not leave her here. He would not leave without helping her. That was also their law, women were to be protected at any cost. It was that and the aching familiarity of this scene that had him moving forward, not entirely ignoring the doctrine of Ètica, but bending it to meet his will.

The beast ripped free with a roar that shook the surrounding buildings, echoing through the night. As if in response the skies opened, dumping sheets or icy rain down onto him. He relished the feel, the scent, the sound of the forest and leapt forward acutely aware of the man frozen in his movements over the woman.

The man didn’t move, the idiot staying atop her like an animal protecting his prey. But that was not a problem, his jaguar was lose, hungry for a fight and seeing an easy battle ahead. Bones stretched and molded as he stripped away his clothes, falling to his knees, muscles and sinew moving, shifting. If the woman was the man’s prey, then he might as well kiss it goodbye. What a jaguar hunted, it killed.

Landing on the man’s back the jaguar’s jaws opened, teeth sinking into the base of his skull clamping down. Sound died in the man’s throat, much the same way as the woman’s cries for help had died in hers. Stepping back on its hind legs the jaguar pulled back, taking the body now growing limp off the woman. When there was no more movement the carcass was tossed aside, hitting a wet cinderblock wall with a deafening smack.

Rage simmered as the beast recognized its kill. Its first kill here, in this place, since that time. That time when he should have been this strong, should have defended what was his, but hadn’t. Guilt assailed him daily, rubbing along his skin like the fur that covered him now. It was second nature, a part of him that he despised but at the same time accepted. He would never be complete because of it, because of the past that he could neither change nor forget.

Lifting its rounded head another roar of anguish was released as the scent of the human’s blood seeped into its nostrils. Its chest heaved, eyes blurring for just a moment with uncertainty.

Then she moved. Behind him the woman was trying to escape, for he too appeared to be her enemy. Her fear, was a tangy fragrance, mixed with courage, a stronger musk that struggled to overpower panic, filled his senses, urged him to turn around, to face her.

This time he saw her through his cat’s eyes. She looked back in disbelief, terror magnified a million times. Ripping the gag from her mouth she let out an ear-piercing scream that had him stepping back.

The memory was quick and painful, slicing through both man and beast like a heated blade. The cat bared its teeth, took a step towards her and swiped at her in shame. She jumped and it cringed, unable to find the right reaction in this form, almost unwilling to shift back.

Again and again he tried to relieve the ball of fire that wracked his body, his senses. Her scent was the same, her fear was real and pure, but in her eyes he saw something else…recognition?

Impossible. The similarities were not possible. He was making it up. His beast mixing signals with the man who knew better. In addition to the inner turmoil, the secret was out. The jaguar that was also a man had revealed itself to her, a human.

But when he turned to face her again, to see the fear and disbelief in her eyes one more time, she was gone. He watched her running towards the only exit out of the alley. He could have chased after her, would have definitely caught her. Probably should have to ensure her absolute safety. Or absolute silence about what she’d just witnessed.

But he did nothing. 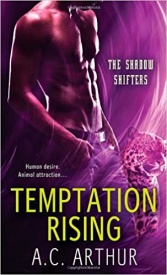