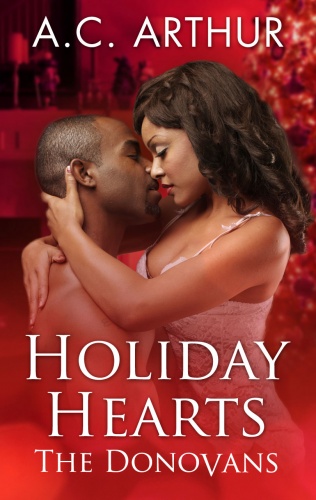 Book 6 in the Donovans Series

As a result of her parents’ messy divorce, Keysa Donovan refuses to celebrate Christmas or to let herself fall in love. A successful marketing exec, she’s positive she doesn’t need anything or anyone else in her life to be happy. Until Ian Sanchez, her sexy co-worker, catches her off guard with homemade cocoa, old holiday movies and kisses that promise the heat of pleasure. Now, Keysa’s second guessing everything she thought she believed and wondering if Ian’s touch is worth risking her heart this holiday season.

Book 6 in the Donovans Series

“Watch out for sheets of black ice on the streets tonight, especially on side roads and parking lots if you’re driving on this wintry evening,” warned the DJ on WJLB-FM from the radio sitting on the corner of Keysa’s desk.

She heard the DJ’s familiar voice of course, but wasn’t paying close attention. It was ambient background noise just like the furniture in her office—there, but not really memorable. It was a quarter after seven, and Keysa Donovan’s focus was on the promotional plan for Joy Noel’s new book that was being released in just five months.

Artistry Publishing, which was Joy’s publisher, was one of Maser Marketing’s biggest clients. Every month they released between four and twelve books. Three executives worked on the Artistry account alone, and Keysa was one of them.

Spread out across her desk was the marketing plan for the mystery novel and analysis of the genre. She had everything from buyer statistics to monthly sales fluctuations and product placement. It was her job to make sure the book was packaged, promoted and distributed in those markets that would make Artistry as much money as possible. Usually it was a job she thoroughly enjoyed, but not tonight.

Three days before Christmas and she was struggling to concentrate. It was that time of year. She knew what it was because it happened every year since she was seven years old. Everyone else was in a festive mood, singing Christmas carols, eagerly awaiting Santa and all the toys, spending every penny they have on gifts for people who probably won’t appreciate them. Yet her world seemed like it was falling apart. It happened repeatedly, year after year, over and over again.

One would think that after twenty years the wound would have healed, the memories would be long gone and that she would have moved on by now. Not.

Her father, Bernard Donovan, lived in Seattle where she’d been born. After the divorce, he’d kept the house, the cars and the dog.

Mary Lee Donovan, her mother, kept Keysa. With her child in tow, Mary moved as far away from Bernard as she could get—to Detroit.

The divorce proceedings began in August, the summer Keysa was six and ended in a tidy settlement and final divorce papers delivered to Keysa’s mother in their new Macomb County apartment on Christmas Eve the following year. Her mother cried for seven days straight. Keysa had wiped her tears, wrapped and unwrapped her own Christmas gifts, ate cereal at every meal, stood on the dining room chair to do the dishes and swore she’d never fall in love, get married or celebrate Christmas ever again.

Over the years, she’d stuck to that rule as best she could. The next year, her mother had tried to make the holidays festive for her only child. Problem was Christmas had already been ruined for Keysa. Sure, she smiled and acted as if she enjoyed the holidays and made her mother believe she had given her the best Christmas presents in the world, but deep down Keysa just wanted it all to be over.

Her father never made an appearance at Christmastime. In fact, Keysa didn’t see much of her father for the first six years after the divorce. She remembered hearing her mother arguing on the phone once and assumed she was arguing with her father again. There was always such drama between her parents that Keysa figured it was easier to avoid seeing her father and just stay with her mother. That is until she was thirteen, and Bernard Donovan came by the schoolyard one day to pick her up. That had been the beginning of a cool weekend and Keysa had mistakenly thought her dismal life had suddenly taken a turn for the better. But before her father left that Sunday he told her he was remarrying and that Keysa would soon have a new baby brother or sister.

Keysa became angry and didn’t see her father or his new family for another five years. It probably seemed petty and more than a little selfish, but to Keysa it was what it was. Her parents had started this war, and she was just an innocent bystander. So her only choice was to pick her armor and defend herself the best way she knew how.

Eventually she got her college degree, moved out of her mother’s apartment and began to make a life for herself. Her father’s involvement in her life grew little by little. And once she learned that the divorce had been her mother’s idea because she’d assumed the Donovan family despised her because she was not rich, Keysa’s feelings had begun to change. Now, at age twenty-eight Keysa spoke to her father at least once a month. She’d even met his wife Jocelyn and their daughter—her half-sister Brynne—in Seattle a couple of times. Knowing that her mother would never approve of her visits with her father, Keysa, kept them a secret. She also strived to keep her mother’s bitterness out of her life. Unfortunately, none of this changed Keysa’s feelings about Christmas.

With a sigh Keysa realized that every year the same feelings came flooding back—the memories, the sadness, the crying. It was pitiful, yet she still couldn’t forget.

The DJ had finished his weather advisory and a song was now playing. She’d been so wrapped up in her thoughts that she hadn’t heard the name of the song, but after a few notes of the intro she balled up her fists and groaned.

It was The Christmas Song by Nat King Cole. The song always made her melancholy. She was just about to turn the radio off when a voice startled her.

Nearly jumping out of her chair, Keysa pressed a hand to her chest to calm her palpitating heart. She jerked her head in the direction of the voice. “Excuse me?” she stammered.

“I said you don’t like that song. I see you’re getting ready to turn off the radio.”

After blinking a time or two Keysa recognized the gray uniform, white name tag and broom in the elderly man’s hand. He was the janitor, but she didn’t have a clue as to why he was cleaning her office now.

“No. I wasn’t going to turn it off. I don’t like the quiet so I was just going to change the station.”

With his grisly gray beard, mustache and dark eyes, the janitor looked up at her. He kept moving, sweeping the hardwood floor in her office as if it were the dirtiest he’d ever seen. “So like I said, you don’t like the song.”

“Uhm, no. I guess I don’t.” Now, for some reason she couldn’t bring herself to change the station. She pulled her hand back, rifled through the papers on her desk and tried to pull herself together. It was after hours, which was why the janitor was there. As usual, she was the one who was out of place.

“I think it’s a great song. And nobody sings it like Nat,” the janitor said, pushing the chairs in front of her desk out of the way so he could sweep underneath them.

“If you like that type of music,” she mumbled, not in the mood to talk period, and certainly not to talk about this song.

“Puts you in the holiday spirit,” the janitor continued. “Makes you think of fireplaces, good food, loved ones. Real special song I’d say.”

“Hmph,” was all Keysa could manage.

“You should give it a good listen sometime,” he said humming through the next few lines of the song.

“No,” she answered briskly.

Keysa slammed her hands down on the desk. “As a matter of fact I don’t. And I don’t like being disturbed while I’m working. Do you think you could come back and finish cleaning my office a little later?”

The janitor stopped, leaned an arm on his broom and simply stared at her. He wore his charcoal gray work cap pulled down low over his forehead so that his dark eyes were barely visible. From the sides of his cap, tuffs of the same grayish white hair covering his face stuck out. His face looked old but his thin wiry frame seemed fit. He was staring at her and she was staring back at him, her gaze dropping to the middle left side of his chest where his name tag read, Jasper.

“Look, Jasper,” she began, her tone considerably more civil than it had been just a few seconds before. “I’m up against a deadline and I’d like to get out of here before midnight. I’m just trying to get my work done, not trying to be rude or anything.”

She sighed. “Thank you.” Mary had raised her to be respectful, no matter who it was.

“I do think you’re working yourself too hard, blaming yourself for something that maybe wasn’t even your fault,” he said, and then turned away from her. He kept sweeping the little pile of dust and dirt toward the door.

“What did you just say?” she asked.

He looked over his shoulder. “Oh nothing, nothing at all, Ms. Donovan. I’ll be getting out of your way now.” When he was through talking, he paused, tilted his head a bit and seemed to be lost in another world.

Keysa figured he was listening to the radio again. The sound of Nat King Cole’s voice was nearing the end of the song as Jasper unexpectedly sang the last line in a deep, rich baritone that almost matched the singer’s note for note. At the end of the song, the janitor touched the visor of his cap and nodded to her with a smile.

Keysa didn’t return the smile but felt a slight stirring in her chest. With a shake of her head she dismissed the weird exchange and resigned herself to get back to work. 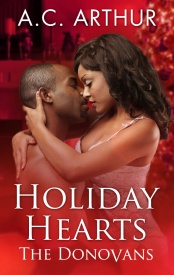