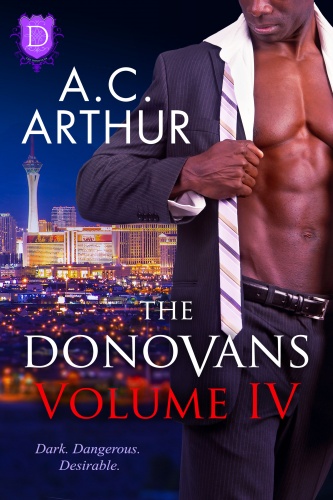 In The Arms Of A Donovan

The last year of Amber McNair’s life has been a whirlwind of jet-setting back and forth across the country, smiling for the cameras and speaking on behalf of full-figured women worldwide. While grateful for the opportunity to become a national foundation’s spokesperson on the growing obsession with body image, Amber is exhausted. The final leg of the promotional tour being held on a seven night cruise was a godsend. The sexy guy on the boat that takes her breath away from the first second she sees him, is a delicious perk.

Brandon Donovan is at his company’s annual morale-boosting and celebratory event. The timing of the Caribbean cruise could not be worse for him to be somewhat off the grid, considering what he and his cousins have just learned about the Senior Donovans. But meeting the charming and beautiful Amber is refreshing. Until he learns that she may not be who she says she is and that her true identity may lead him to the man who claims to be a Donovan.

Falling For A Donovan

Bailey Donovan’s family has been dealt a serious blow. While her cousin’s wife fights for her life, a manhunt has ensued for Roslyn Ausby. Bailey’s twin brother’s wedding plans have been halted by his fiancé’s problematic pregnancy. Her father is still recovering from his heart attack and another cousin is on sabbatical for reasons nobody in the family knows. Now is definitely not the time for Bailey to have urges she’s never before experienced. And it’s certainly not the time for her to fall for a man’s hot kisses and tender caresses—especially not this man.Navy SEAL

Devlin Bonner’s dark past races to catch up with him, just in time to throw a monkey wrench in the steamy romance he has going with Bailey. While the word “romance” has never been in his vocabulary, the thought of losing Bailey either in this war her family has going or through a secret threatened to be revealed by someone Dev once called a friend, is not acceptable. And for Dev, the unacceptable must always be eliminated. Will the chances he’s taken to be with Bailey withstand the storm brewing around them, or will Devlin ultimately regret falling for a Donovan?

Destiny of a Donovan

Brynne Donovan has been in one battle after another—with obesity, drowning in her big sister’s shadow and now finding out that her father had a secret son. She’s reached her breaking point and decides to recuperate from her weight loss surgery in private. It’s well past time for her to take control of her life and to live the way she wants without her family name dictating her choices. Accepting the invitation of a friend, Brynne decides that her new life will begin at the end of her stay at a vineyard in Napa Valley. She could not have selected a better place to convalesce, especially since her friend’s older brother was very easy on the eyes and as charming as any storybook prince. He was everything her family would disapprove of—older, richer and of a different race. But Brynne doesn’t care, the passion between them overrules everything and everyone else, until her new big brother shows up and threatens everything Brynne has fought so hard to find.

Wade Basset Banks, III is a third generation billionaire, who’s known in the business arena for his tenacity and killer smile. When his sister introduces him to her college friend, it doesn’t take Wade long to decide he wants her. It’s then that he recognizes her name and recalls meeting other members of this illustrious family. Wade knows all about the Donovans and from what’s been reported in the media, he knows about the drama surrounding them. But none of that matters, all Wade wants is Brynne happy and safe in his life. Even if that means protecting her from people in his past.

The three books are also available separately in ebook format. 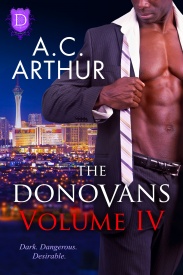